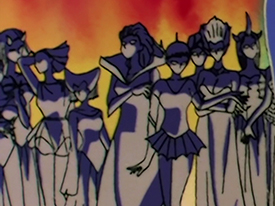 In Sailor Moon, Monster of the week[1] is a colloquialism used to refer to monster sent by a major villain's henchmen (such as Jedite or Emerald) to help them steal energy for their particular purposes.

Sailor Moon series never explicitly refers to the monsters in any of the four seasons as "Monsters of the Week". Instead the term merely brings attention to frequency and number of monsters the protagonist, Sailor Moon has to fight.

"Monsters of the Week" usually only appear in one episode, and there is usually only one each per episode (although there are some exceptions). Most of them are destroyed by Sailor Moon using whatever her main attack is. Rarely, some monsters are destroyed by a Sailor Scout or someone else.

It is interesting to note that each season has one monster of the week that plays a major role. In Sailor Moon, Zoycite's monster Housenka kills Neflite, one of the more major characters. In Sailor Moon R, the Cardian Racy destroys Sailor Moon's locket, only for Queen Serenity to restore it and make it more powerful.

In Sailor Moon S, Kaorinite's monster Senishenta appears in two episodes before she is destroyed. In Sailor Moon Super S, ParaPara's monster Mr. Magic Pierrot directly kills Hawk's Eye, and indirectly kills Tiger's Eye and Fish Eye by destroying Serena's dream mirror, forcing them to give up their power to rebuild it (though all three are revived, and Mr. Magic Pierrot destroyed).

Most monsters of the week are female, though there are some male monsters, such as five out of the Seven Shadows, a few Cardians, the droids Doom and Gloom, and any Remless working for Fish Eye or JunJun, plus Mr. Magic Pierrot.

In Sailor Moon R, there are two types of monsters. The first is Cardians, sent by Alan and Ann to gather energy for the Doom Tree. The second is Droids, sent by the Negamoon Sisters and Emerald to help them take over Crystal Tokyo. Most Cardians and droids are destroyed by Sailor Moon's Moon Scepter Elimination.

In Sailor Moon S, the monsters are Daimons, or Daimon Heart Snatchers. They are sent by the Bureau of Bad Behavior to extract Pure Hearts. Most of them are destroyed by Sailor Moon's Moon Spiral Heart Attack or Rainbow Moon Heart Ache.

In Sailor Moon Super S, the monsters are Remless sent by the Dark Moon Circus to defeat the Sailor Scouts whenever they try to stop them. All of them are destroyed by Sailor Moon's Moon Gorgeous Meditation.

Retrieved from "https://sailormoondub.fandom.com/wiki/Monster_of_the_week?oldid=14703"
Community content is available under CC-BY-SA unless otherwise noted.