"Pull yourself together, Serena! This is no time for crying!"
This article is a stub and in need of expansion. You can help Sailor Moon Dub Wiki by expanding it.

"Usagi Tsukino is a little clumsy and a crybaby, but she's also one spirited eighth grader. One Day she meets a black cat with a crescent moon on her forehead and transforms into the pretty sailor-suited guardian and justice, Sailor Moon! As a chosen guardian of justice, Usagi apparently has a mission to protect a princess and and to find her fellow Guardians and the Legendary Silver Crystal. Meanwhile Queen Beryl of the Dark Kingdom sends her subordinates to the town where Usagi lives. They cause strange events to occur there, all in the effort to acquire the tremendously powerful Silver Crystal. Can Sailor Moon and the other Guardians successfully find the Legendary Silver Crystal and protect the princess...?"
—Official Summary

While she is hurrying to get to her school on time one day, fourteen-year-old Usagi Tsukino accidentally steps on a black cat. When she picks it up and takes off the band aids on its forehead, she notices a crescent shaped symbol on the cat's forehead. Usagi, however, thinks that it's just a bald spot and runs off to school. Later that day, Usagi takes a nap, only to be awakened by the cat from earlier that day.

To her surprise, the cat starts talking to her and introduces itself as Luna. Luna tells Usagi that she is destined to become a Sailor Soldier, and gives her a mystical brooch that enables her to transform into Sailor Moon by calling out Moon Prism Power! Make Up! After transforming, Sailor Moon hears her good friend, Naru, screaming and goes to rescue her from a Youma. After defeating the Youma, she meets Tuxedo Mask, a mysterious man who encouraged her to defeat the Youma during the fight.

The next day, Usagi wakes up to go to school thinking that what happened that night was dream, that is, until she hears Naru telling her friends about what happened the previous night. Soon, Usagi finds out that not only does she need to find the other Sailor Senshi, but she also has to find the Moon Princess and protect the supremely powerful Silver Crystal from the Dark Kingdom; a mysterious group of villains that attempt to steal life energy from humans to strengthen and revitalize their ruler Queen Metaria to dominate Earth and exact their vengeance on the people of the White Moon, who have been reborn and reincarnated as "ordinary" teenage girls on Earth.

Usagi eventually finds the other five Sailor Senshi-Sailor Mercury, Sailor Mars, Sailor Jupiter, and Sailor Venus- and finds out that Tuxedo Mask is actually Mamoru Chiba, a man that had previously made fun of her about multiple things, including her low test grades and her meatball-like hairstyle. He and Usagi later begin to fall in love with each other.

However, during a battle with Kunzite, Tuxedo Mask injures himself while trying to protect Sailor Moon from an attack, causing him to lose consciousness as well. Sailor Moon is overwhelmed with sadness when this happens and after crying out in anguish, her tiara breaks, revealing a crescent moon symbol on her forehead and instantly transforms into Princess Serenity, the Princess of the Moon Kingdom, Silver Millennium.

After regaining her memories of her past life, one of her teardrops reveals the vastly powerful, legendary Silver Crystal itself, which starts to send out immense healing energy throughout the city. After attempting to attack the newly awakened Serenity, Queen Beryl and Kunzite abduct an unconscious Tuxedo Mask.

To find answers, Luna takes the five Sailor Soldiers to the Moon, where the ruins of Silver Millennium lie. The spirit of a young woman with silver hair appears before them and thanks Luna for bringing them here. She reveals to Sailor Moon that she is/was her mother in her past life, Queen Serenity. She explains that they all lived happily on the Moon with their beloved kingdom, the very first era of Silver Millennium. However, an evil entity from the cosmos, Queen Metalia, arrived out of the blue and brainwashed the humans of Earth to plan a major assault on the Moon Kingdom.

After returning home, Usagi runs into Mamoru, who she is shocked to discover has been brainwashed by Queen Beryl. A battle in another dimension takes place between Queen Beryl and the five Sailor Senshi. Sailor Venus manages to kill her by using the holy sword. Endymion runs off with Sailor Moon in pursuit.

Elsewhere, the four Inner Sailors are confronted by the four Knights, who they succeed in freeing from Metalia's control. Before they can embrace, Metalia kills them all. Saddened at the loss of their sweethearts, Mercury, Mars, Jupiter and Venus are told by Kunzite to keep on fighting to protect their princess. In the headquarters of Dark Kingdom, Sailor Moon uses the sword to stab Endymion in the chest and then herself.

She collapses on top of Tuxedo Mask and the others are horrified to have the tragedy repeated yet again. The complete Silver Crystal suddenly grows and envelops Sailor Moon and Tuxedo Mask in it before disappearing. Sailors' Mercury, Mars, Jupiter, and Venus all teleport after them. A hurt Luna asks Artemis to teleport her to the Moon. He does so, and Luna desperately pleads for Queen Serenity to show herself once more.

With the arrival of Chibiusa from the future, things take a strange turn for the Sailor Guardians. At the same time, the Black Moon Clan also appear. After Sailor Mars, Sailor Mercury, and Sailor Jupiter are captured by Koan, Berthier, and Petz, though at the cost of them being destroyed while Rubeus takes the captured Guardians with him, Calaveras meets her end before she can kidnap Sailor Venus, at which point Chibiusa admits she's from the future to Venus, Sailor Moon, and Tuxedo Mask, and agrees to take them back to her time, meeting the Sailor Guardian of the Time Gate, Sailor Pluto.

Upon discovering the wasteland of 30th century Crystal Tokyo as a result of the Black Moon Clan's attacks, Sailor Moon is kidnapped by Prince Demande, due to her resemblance to her future self, Neo Queen Serenity. Tuxedo Mask's future self, King Endymion, explains the history of the Black Moon Clan, Nemesis, and Chibiusa being Usagi and Mamoru's future child. When Tuxedo Mask and Chibiusa are separated in the time stream, Wiseman uses the opportunity to brainwash Chibiusa to his side, turning her into Black Lady.

Meanwhile, Usagi is able to free herself and the captured Sailor Guardians from Nemesis and return to Earth, only to then learn of Wiseman's true identity as the Death Phantom. Demande loses his sanity and attempts to merge the Silver Crystals of the past and future, which would be catastrophic, forcing Pluto to break her cardinal rule to never stop time to prevent it, which results in her losing her life for violating her duty.

This manages to break Death Phantom's hold on Black Lady, who reverts back to Chibiusa before transforming into Sailor Chibi Moon. Together, Sailor Moon and Sailor Chibi Moon destroy Death Phantom and Nemesis, before Chibiusa then has to return home to the future, only to then be sent back by her mother to receive proper training as a Sailor Guardian, giving Usagi a gift from her future self, the Heart Moon Rod.

At a July 6, 2012 press conference celebrating the 20th anniversary of the series, Naoko Takeuchi, Kodansha and idol group Momoiro Clover Z announced that a new anime adaptation of Sailor Moon was in production and scheduled to premiere in Summer 2013 for a simultaneous worldwide release,[3][4] with Momoiro Clover Z performing both the opening and ending themes.[5]

On March 13, 2014, the official website for the new anime was updated to reveal a countdown, that began on March 14, regarding a special announcement that would be revealed on March 21st, 2014.[8] That same day, an image displaying the key visual art, synopsis and staff for Sailor Moon Crystal were announced on Toei's website. The official artwork also revealed the name for the anime, Pretty Guardian Sailor Moon Crystal (美少女戦士セーラームーンCrystal, Bishōjo Senshi Sērāmūn Kurisutaru?). The series is animated by Toei Animation and directed by Munehisa Sakai.[9]

At the 20th Anniversary Project Special Stage on April 27, 2014, the Japanese cast and premiere date were announced. Sailor Moon Crystal would premiere on July 5, 2014 with the first episodes premiering on the first and third Saturdays of each month.[10]

While Kotono Mitsuishi reprised her role as protagonist Sailor Moon, from the previous series, a new cast of voice actresses were chosen for the four Sailor Guardians. Hisako Kanemoto was cast as Sailor Mercury, Rina Satō would voice Sailor Mars, the voice of Sailor Jupiter would be provided by Ami Koshimizu, and Sailor Venus would be voiced by Shizuka Itō.[10]

On April 30, it was announced that Sailor Moon Crystal would run for 26 episodes, streaming via Niconico, on the first and third Saturday of each month for a whole year from July 5 onwards.[1] Crunchyroll would also stream the series on their website on July 5, 2014 at 6:00am ET (10:00 UTC).[2] The first trailer for Sailor Moon Crystal was published on YouTube on June 5, along with an announcement of the voice talent slated to play Tuxedo Mask and Luna (Kenji Nojima and Ryo Hirohashi respectively.)[11] A starter book for Sailor Moon Crystal was released during the Summer of 2014. The book included interviews with the new Japanese cast and information for the fans.[12]

On September 28, 2015, the day in which the final episode of the Black Moon arc was aired on Japanese television, it was announced that production for the third season of Sailor Moon Crystal was given the green light. The third season of Sailor Moon Crystal is known as the Death Busters arc, which is based on the Infinity arc of the manga.[13] Chiaki Kon replaced Sakai as the series director.

The newly appointed staff and cast for the third season were announced in a live webcast on January 27, 2016.[14] The first episode of the Death Busters Arc was previewed at a special event held at Animate Ikebukuro store in Tokyo on March 6, 2016.[15] The third season began its regular airing on April 4, 2016.[16]

On January 25, 2017, a fourth season of Sailor Moon Crystal was announced on the Sailor Moon 25th anniversary website,[17] later confirmed to be a theatrical film project divided into two parts, with Kon returning as main director.[18]

July 2014, Viz Media gained the license for Sailor Moon Crystal anime for simulcast streaming.[19][20] Viz aimed to release the franchise digitally with English subtitles beginning in Summer 2014, followed by a new English voice dub starting in late 2014. June 2014, Viz was only exercising its video streaming rights in the United States, plans for streaming the series to viewers in Canada not yet announced at time.[21]

July 2015, Viz Media officially announced that the English localization for Sailor Moon Crystal would debut at the 2015 Anime Expo.[22] The dub for Crystal would use the same cast used in the new localization of the original Sailor Moon series.[23] On November 2015, the English dub of the first two episodes and were made available to watch on Hulu. 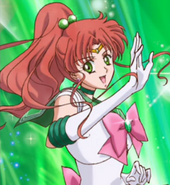